May 07 Posted by Linda Lee in Blogs

Once a month, a group of like-minded women get together to share their artistic works and listen to a program. The June program was all about the Alabama Chanin experience, and many examples of incredible work, a la Chanin, were shown.

Barbara was wearing a Pearl Jacket that she had made in Alabama Chanin's black organic knit, and she had stitched it all by hand with the seams on the outside. I loved it!

I came home and decided to literally copy her, but I got a little sidetracked and decided to use her technique to make a Pearl Vest (the jacket without the sleeves, as simple as that).

So here's the deal. I love sports of all kinds and the NBA playoffs are going on, so I want to watch every game that I can. That requires being in the TV room rather than my sewing room. But who can just sit and watch TV without a little something else going on? Hand stitching a Pearl Vest was the answer. My favorite team, the Oklahoma Thunder, won their game 7 of the series just as I put the last stitch on this vest.

Using a rotary cutter and my basting as a guide, I cut away 3/8", leaving 1/4" seam allowances.

I used the guide sheet included in the pattern as my order of construction and hand stitched all seams at 1/4". Coats and Clark Button Craft thread in black was my thread of choice, and I stitched approximately 1/4"-long running stitches, leaving the knots and tails exposed wherever they landed. (Games 2-6)

The only deviation from this was to bind the armholes using 1"-wide strips of grey knit sewn on with a cretin embroidery stitch. (Game 7)

Everyone here at the Sewing Workshop loves stripes, so I made an Urban T-shirt (by machine!), eliminating the front flange and lengthening it 3". This has become my new basic and all-purpose t-shirt pattern. The how-to on this is in the February 2014 Sew Confident! tututorial.

Take a look at my finished ensemble and let me know what you think. 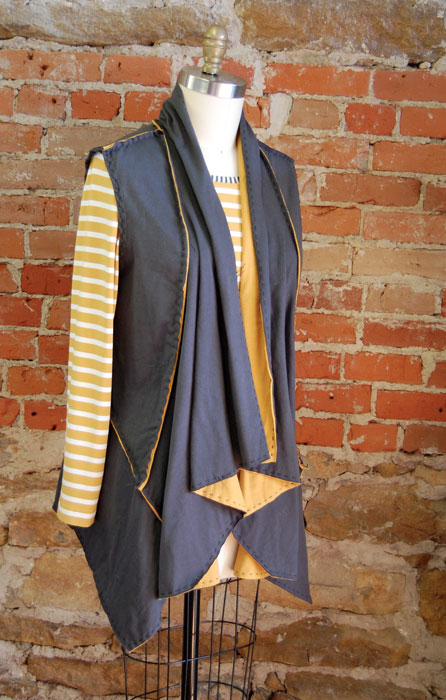