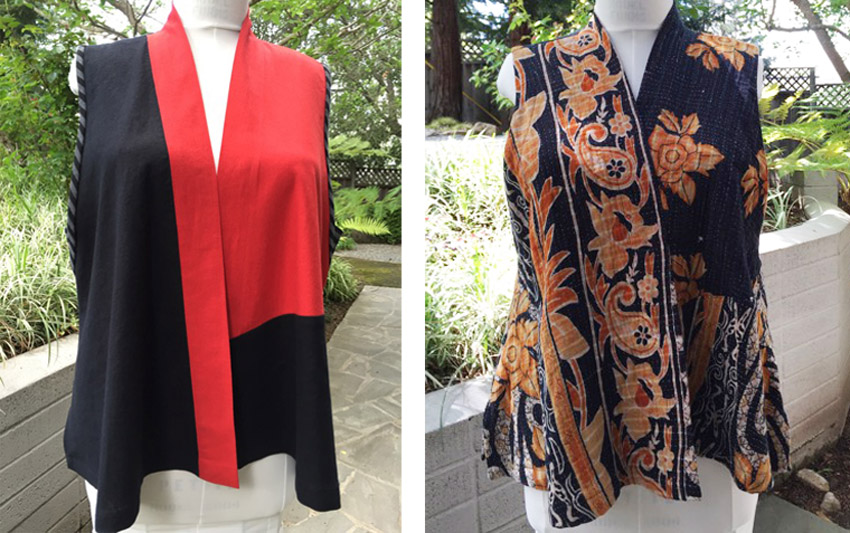 Our customer Nancy Means has used the Tremont Jacket pattern to make some fantastic vests. She is our guest blogger for this post. Whether you like sleeveless for summer, or layering vests for the cooler months ahead, we think you'll like these ideas.

I started sewing when I studied Fashion Design at Pratt Institute and then became a shoe and textile designer. I didn't sew for about 20 years, and started again when I came to Northern California and took some classes with Linda Lee at the [original] Sewing Workshop. That began my renewed love of sewing. I have continued with membership in two local garment-oriented sewing groups, taking classes and attending meetings and workshops. I have many sewing friends that all speak the same sewing language that we love.

I took a class with Ronda Chaney at Cañada College (Designer Details) the same time that Linda was the featured speaker at the school's Artistry in Fashion event, where I first saw the Tremont pattern. The red/black Tremont vest was made for that class as a color blocking project. The Kantha cloth vest was made soon after as a a challenge in a group called "Menlo Mornings", a neighborhood group (garments) that is part of the San Jose ASG chapter.

I have been a happy subscriber to Sew Confident! since it's inception, and I love the Sewing Workshop patterns. I have also purchased all of Linda's Craftsy courses, and I have all her books.

I always learn something from all her efforts, and I hope to attend Sew Kansas soon.

I guess you could call me a major fan of Linda's, and I look forward to every pattern.

The first (red and black) Tremont vest was made for a class called Designer Details taught by Ronda Chaney at Cañada College as a color blocking project. The fabric is a linen/rayon mix with knit bindings. It was finished in December. It was a really fun project. 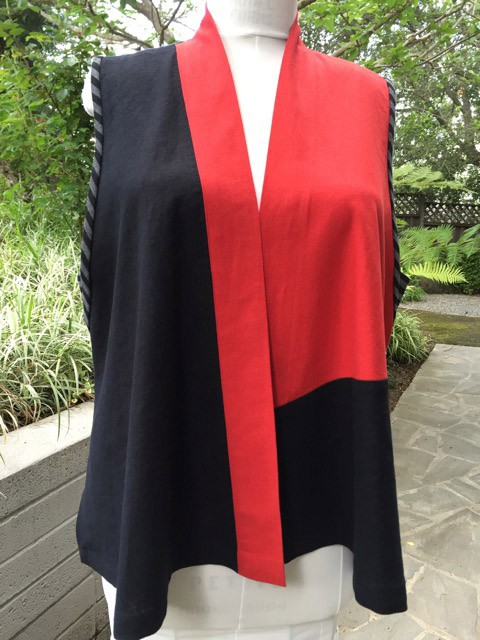 I made the left front and right front with the same pattern piece... I felt the asymmetry was distracting. I blocked the colors on the lengthen/shorten line. 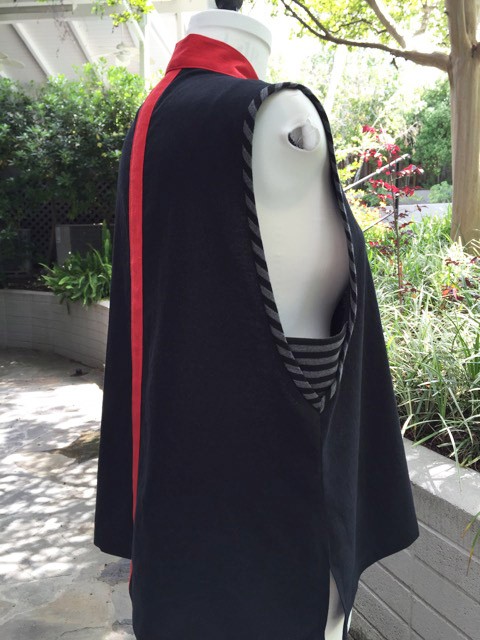 ​The stripe on the back was overlaid and topstitched down to break up the large back piece. 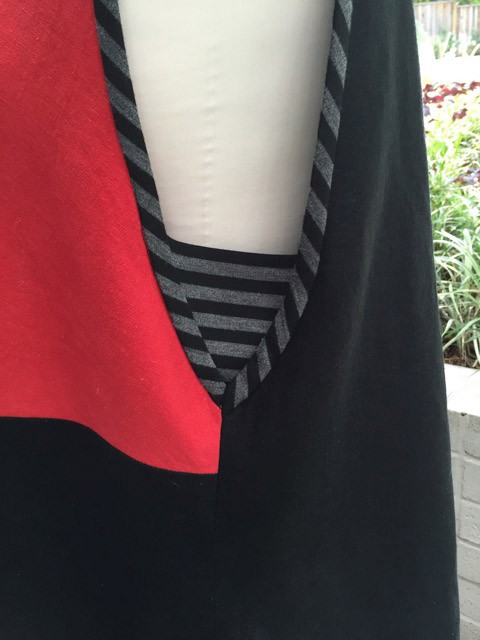 The little gusset kept the armhole from gaping. 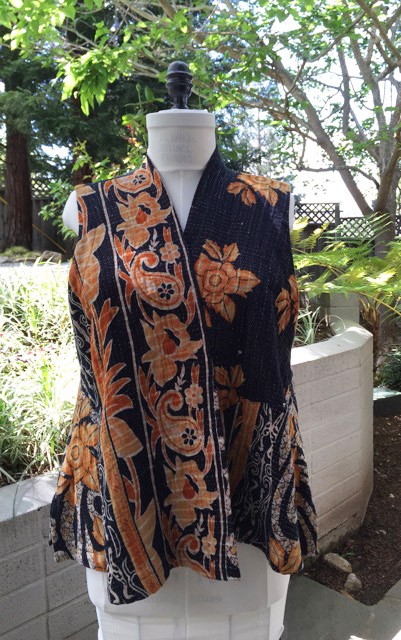 The second vest was a challenge for a group I belong to called Menlo Mornings, a garment-only neighborhood group of American Sewing Guild. 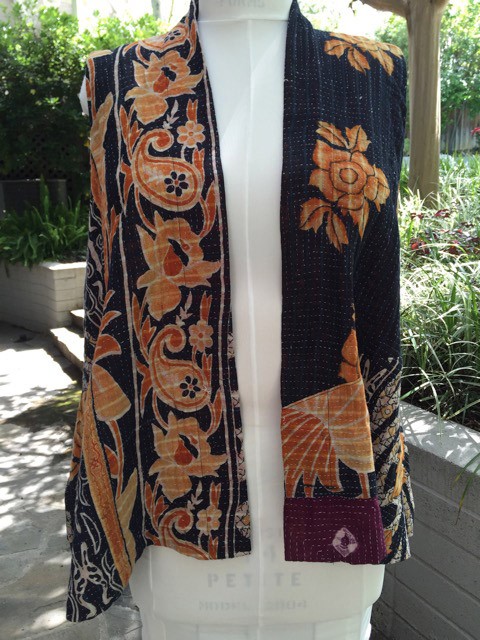 This variation was made using Kantha cloth.

Note: Kantha is a type of Bengali embroidered quilt. 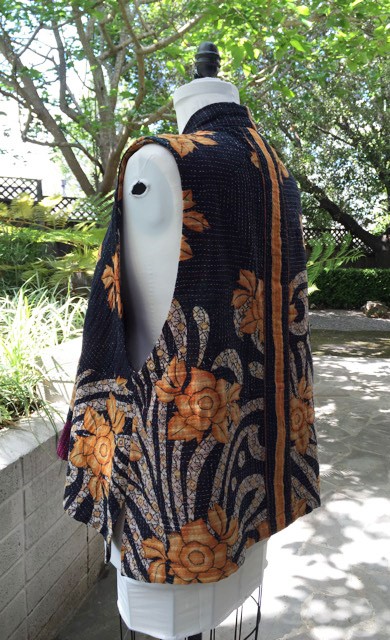 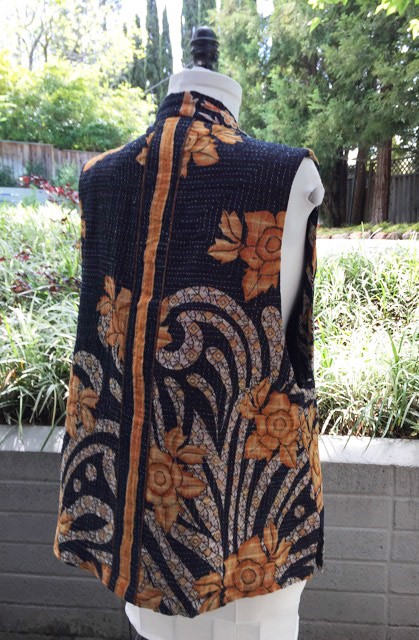 ​Thank you to Nancy for sharing these pictures and the story behind them!

Our original threadWEAR 301 post called Metallic Terry Vest that describes how to make the Tremont Jacket into a vest can be viewed here.